← more from
Thrill Jockey Records
Get fresh music recommendations delivered to your inbox every Friday. 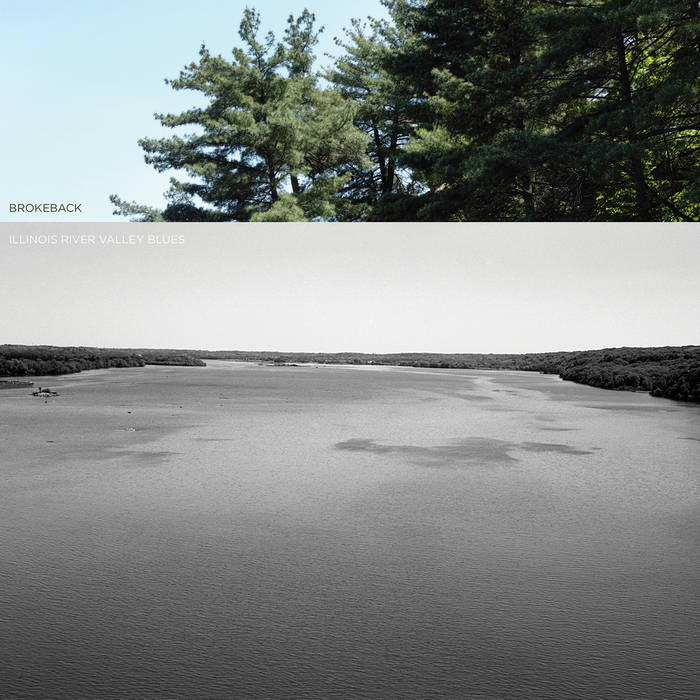 A sense of place has been essential to the music of Brokeback since guitarist/bassist Douglas McCombs first launched the project in 1995. Initially conceived as a solo outlet, the Chicago group has taken on new dimensions over the past two decades, morphing from the lean, pastoral ambience of the first album, Field Recordings from the Cook County Water Table, to the more muscular, taut arrangements and dynamic swells of the last release, Brokeback and the Black Rock, for which McCombs assembled a new quartet lineup. Each album develops with exacting detail, revealing McCombs’s gift for dialing in the essence of a mood, feeling, or distant locale with a handful of reverb-laden guitar tones, elegant and sustained, strategically placed and sparingly deployed. The instrumental landscapes he creates on Illinois River Valley Blues are utterly transportive, evoking familiar open-frontier soundtracks and charting out new sonic territory.

Thematically this is McCombs’s most personal offering yet, reflecting on his early years growing up along the Illinois River corridor between Peoria and Chicago. The sepia-toned opener “Ride Ahead and Light the Way for Me” is drawn from memories of evening rides on the river with his father, while the noir album bookend “Night Falls on Chillicothe” is named for a river town north of Peoria near where McCombs’s grandparents lived. “I remember hearing the trains at night while I was in bed and knowing they had just come from Chillicothe,” he says.

Though the inspiration is McCombs’s, the execution is wholly a group effort. With the same instrumentation and mostly the same lineup as the previous album, the band stretches its leader’s eternal fascination with the roots of American guitar music in bold new directions. A serpentine mystique runs through “Rise, Fernanda, Rise!,” and “Cairo Levee” conjures a desert atmosphere closer to the Sahara than the American southwest. Side one of the album closes with a moody, meditative take on “Spanish Venus,” a ballad written by cornetist and sometime Brokeback collaborator Rob Mazurek. “I could hear Brokeback doing the tune from the moment I heard him workshopping it with Pulsar Quartet at a little cocktail bar in Logan Square,” says McCombs.

Several songs feature lush, multi-layered vocals by Amalea Tshilds (the Paulina Hollers), who made a deep impression on McCombs with a spellbinding a cappella performance a couple years ago. “I often imagine female vocals on Brokeback records, but I wanted it to be someone that I have personal history with, someone who can nail it, not to mention someone who I know digs the music,” he says. “That's why Mary Hansen sang on all those earlier records and why I wanted Lea for this.”

McCombs’s singular approach to guitar and bass, characteristic of his work with Tortoise, is expertly enhanced here by James Elkington (Tweedy, Steve Gunn) on second guitar (moving over from drums on the last record). The two salute one of McCombs’s favorite bands, Television, with latticed dual leads on the stately yet aggressive “On the Move and Vanishing,” while Elkington’s subtle layers of pedal steel and organ burnish more ruminative forays like “Andalusia, IL” and “Ursula.” Their intertwining flights are anchored by the sturdy yet versatile rhythm team of bassist Pete Croke (Exit Verse, Tight Phantomz) and drummer Areif Sless-Kitain (the Eternals), the newest member of Brokeback.

Illinois River Valley Blues is a winding, wistful travelogue that not only captures darker textures but mines their depths. That’s been part of McCombs’s vision for Brokeback from the start: “To me a song is not worth writing if it doesn't have a strong sense of melancholy,” he says.

Bandcamp Daily  your guide to the world of Bandcamp

Little Brother joins the show to discuss their beautiful journey, plus tunes from Fat Tony